On February 16th Maria and Will attended the final crit of a 5 week design project that was part of a Graphic Design BA at University for the Creative Arts, Epsom. Autonomy had constructed the project earlier in the year in conjunction with James Trafford, a Lecturer in Contextual & Theoretical Studies, Julian Siravo, an architect whose work has inspired our interest in this area, and Diann Bauer, an artist, writer and member of Laboria Cuboniks. Below are the products of the students’ labours.

What excited us about this project was the opportunity to facilitate the visual prototyping of design ideas that take ‘post-work’ problems as their premise. While political and economic dilemmas are obviously essential to envisaging better futures, constructing the look, feel and practicality of a world with much less waged and unwaged work is itself crucial for provoking constructive responses and for taking steps towards any kind of real world implementation. Simply put, design makes ideas more tangible.

Will had given a briefing presentation to the students in January, presenting the problems that face society today and in the coming decades with regards to work cultures and practices. He touched on contemporary issues such as rising precarity, the gendered division of labour, and the nature of conditionality in the welfare system, as well as issues such as the potential uses of automation and the possible benefits of UBI and UBS as part of an updated welfare state.

Working in the allocated groups, students had to produce each of the following, in response to the problems that a ‘post-work’ world would have to deal with:

An alternative form of mapping and architecture

These projects were experiments in utopian thinking and we encouraged students to flex their design imaginations in more speculative directions.

Below we have included photos and materials from some of the groups that we worked with over the project period. Many thanks to James, Julian, Diann, UCA and the students for collaborating with us on this – we had a lot of fun and hope this will lead to further projects in this direction!

The group behind ‘Ixora’ took the old site for the ‘Millenium Dome’ as their premise. ‘Ixora’ is a species of plant which has a dome-like form and the group utilised it for their name and branding.

Based on the assumption that the population will have more time for themselves, the group decided to re-imagine the dome space as a place of relaxation and learning. The Ixora Dome is a tropical environment consisting of three levels: there is a basement level which is made up of baths, saunas and a hot spring, a ‘beach’ level with different water activities and a ‘green house’ level which has fruits that can be eaten. The Ixora Dome would be part of an expanded UBS (Universal Basic Services) policy and so would be free for all.

Their work revolved around a series of detailed blueprints of the Ixora Dome that gave a clear view of each of its floors and structural mechanisms (including shafts that could carry the steam from the hot spring / sauna centre right up to the green house at the top!) The dome would be covered in solar panels in order to be energy efficient.

They also produced a brochure to go alongside the designs.

The Otium group decided to re-imagine the town of Epsom as a post-work environment (where UBS, UBI and a new work ethic have changed the lifestyles of the population).

They used current maps of Epsom to show what a fully pedestrianised town centre would look like and drew in bike paths, park areas and so on. They produced a model, a short video that combined found footage, a booklet and a series of blueprints.

At the centre of ‘post-work Epsom’ lies Otium (coming from the latin term for leisure). Otium has replaced the town centre and car park in Epsom: it is a large activity centre complete with classrooms, sports facilities, equipment and other features. As the images show, the Otium complex features solar panels on its exterior from which it draws some (if not all) of its power.

The group discovered that Epsom was once a town popular for bathing and for it’s bathing salts, so there would be a salt bath installed within Otium also.

The group went into the town centre  of Epsom and asked locals what they would do if they had more time for themselves. They took these survey results and produced a timetable for the Otium complex so that the needs and desires of the town’s population would translate directly into actualisation. Dance classes, reading classes for the blind, swimming lessons, etc. were all incorporated into Otium’s schedule.

This group had decided to re-purpose the current London Underground system as part of a new TFL that exists in their post-work world.

With rush hour a thing of the past, how could the underground network become a convenient and fun mode of travel? The students decided that a pod-based system, wherein users can ‘call’ a pod with an app on their phone and be taken to any destination in the network, would be ideal. There would be no more separated tube lines, but one single line that the pods can intelligently navigate once given a destination.

The group also re-imagined city life above ground. London would now have three separate ‘levels’: the pod-system underground, a ground level for emergency services and then a higher level for pedestrians and cyclists. 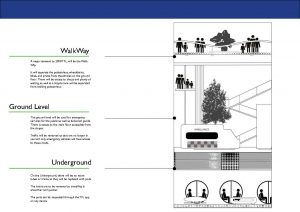 This group took housing provided by a decent UBS policy as their premise. They were interested in communal living setups and were keen to build a sense of community into the ‘bundle’ housing networks that they designed.

The housing ‘blocks’ were dynamic enough so that various housing formations could be built, depending on the environment into which they would be integrated.

In the critical discussion, Julian asked questions about property ownership and the potentials for bundle housing to facilitate communal spaces and even living. If UBS provides free housing for all – does individual ownership of the bundle make as much sense as it did under a system of private homeownership?

The group produced a booklet which detailed some of their principles and ideas concerning other possible uses of bundle-style construction.

The final group decided to pursue the idea of a free food service provided by a sufficient UBS policy. Provoked by the perceived need for sociality and community that would remain after the population’s time is spent less and less at places of employment, the group believed that well designed, desirable food halls could become the future social hubs.

They made a model food hall with lego, a short promotional animation and three different posters.

In the critical discussion the use of a pixel quasi-currency to exchange for meals was questioned (‘is it any different to money?’) We agreed that it was important that UBS food halls would free of the stigma that is attached to food banks today (hence the need for good design) and there was an interesting chat around who would be cooking the meals (would they be automated or would it be a volunteer-run operation?)

Keynes, Foucault and the ‘Disciplinary Complex’ – Danielle Guizzo and Will Stronge
Autonomy in the Independent: Right-wing support for Universal Basic Income
We use cookies on our website to give you the most relevant experience by remembering your preferences and repeat visits. By clicking “Accept”, you consent to the use of ALL the cookies.
Do not sell my personal information.
Cookie SettingsAccept
Manage consent

This website uses cookies to improve your experience while you navigate through the website. Out of these, the cookies that are categorized as necessary are stored on your browser as they are essential for the working of basic functionalities of the website. We also use third-party cookies that help us analyze and understand how you use this website. These cookies will be stored in your browser only with your consent. You also have the option to opt-out of these cookies. But opting out of some of these cookies may affect your browsing experience.
Necessary Always Enabled
Necessary cookies are absolutely essential for the website to function properly. These cookies ensure basic functionalities and security features of the website, anonymously.
Functional
Functional cookies help to perform certain functionalities like sharing the content of the website on social media platforms, collect feedbacks, and other third-party features.
Performance
Performance cookies are used to understand and analyze the key performance indexes of the website which helps in delivering a better user experience for the visitors.
Analytics
Analytical cookies are used to understand how visitors interact with the website. These cookies help provide information on metrics the number of visitors, bounce rate, traffic source, etc.
Advertisement
Advertisement cookies are used to provide visitors with relevant ads and marketing campaigns. These cookies track visitors across websites and collect information to provide customized ads.
Others
Other uncategorized cookies are those that are being analyzed and have not been classified into a category as yet.
SAVE & ACCEPT